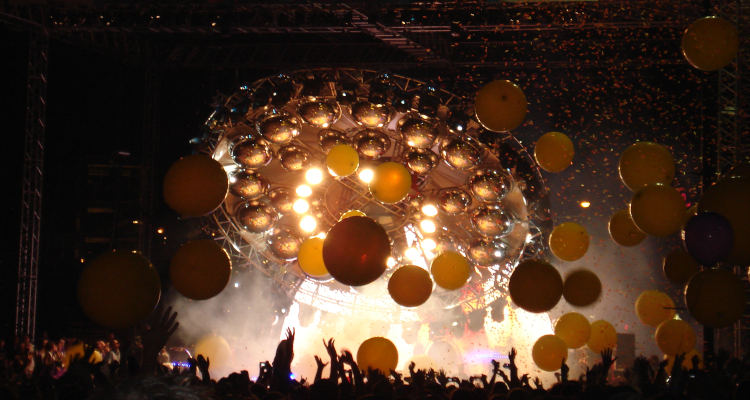 First in history “space bubble concert” will be organised by The Flaming Lips on the Friday evening, December 11th, from the Criterion in their native Oklahoma City. The idea of unusual and at the sae time safe concert was born in the head of Wayne Cole, a lead singer of the band, last year. He said that it was a small drawing of The Flaming Lips concert in 2019. There he saw himself as the only person in the air bubble, while the rest was without them. Then, in 2020, Coyne made another picture, where everyone was already in bubbles – both band members and spectators.

Wayne Coyne shared his plans on the undoubtedly innovative gig on social networks on 13th of November. In general, 100 tickets are reserved, each including one “space bubble”. The purchase is already available! Passes for the first four “bubble rows” will set spectators back $400, whereas tickets for further rows (five to seven) will cost $300 and rows from eight to ten will ome with a $200 price tag. Size of single bubble can comprise up to three persons to feel comfortable during whole performance. Detailed information can be found can on the Criterion’s website.

The indisputably hard effort to afford fans a live-music show in the midst of the pandemic will be remembered the “world’s first space bubble concert,” however, it bears mentioning that Coyne and his bandmates aren’n strangers to the experience with strange enclosures in terms of music needs. Spherical enclosures were used June appearance on The Late Show with Stephen Colbert where the group entered plastic bubbles, packed their instruments and all stuff, in order to entertain viewers in bubbles and capture the moment on the camera.

Just like in the case with October bubble event, attendees will be acquainted with all-compassing waiver. Wayne Cole already tested plastic holders on larger audience and will write the specifics of the upcoming concert on the Facebook band page soon.